As a 30-year accomplice to the current state of media in America, I am truly sorry.  It’s hard to distinguish the truth from political smokescreen on the current media landscape.

No wonder people in your generation, along with your parents’ and grandparents’ generations, are becoming so entrenched against one another.  We have formed our opinions and prejudices, and it’s too easy to find an article or op-ed that supports our stance – left or right, progressive or conservative, Democrat or Republican.  Unbeknownst to some of us, the viral story in our newsfeed that justifies our “rant du jour” is likely to be void of facts.

But…you should have seen what journalism was back in the day!  When I was your age, the anchor for the CBS Evening News was the most-trusted man in America.  He was revered by millions, and I wanted to follow in his footsteps.

“And that’s the way it is,” he’d end his broadcast – one choice among three, possibly four, options for national news at 6:30pm.

Walter Cronkite (CBS), as well as John Chancellor (NBC), Chet Huntley and David Brinkley (ABC), and Robert MacNeil and Jim Lehrer (PBS) possessed credibility.  They only had one shot each day to get the facts straight.  Facts were checked.  Sources were vetted.  Statements were verified.  Reports on controversial subjects included opposing viewpoints.  Reporting, actually, was pretty fair and balanced.

America trusted her journalists to winnow the truth from multiple sources’ stories before presenting information in “the news.”  Because all broadcast media outlets had the same national deadline, 6:30pm Eastern, the emphasis was on being factual more than being first.

When Atlanta media mogul Ted Turner launched his 24-hour news service, Cable News Network (CNN), he sent a shockwave throughout the world.  Suddenly, there was an appetite and expectation for immediacy whenever events happen.

Gone were the luxuries of verifying facts.  The cable news ‘round-the-clock reporting forced the Big Three (ABC/NBC/CBS) to jump into the race to become first to report – even if that meant running the risk of being inaccurate.

Rushing to get on first with news, even with incomplete information, and letting the viewer watch the discovery process unfold has crept into every level of news reporting.  This has left the door ajar for speculation and misinformation.

When the human mind doesn’t have all the facts, it makes up stories to fill in the gaps.  Reporters are just as susceptible, if not more so, than “Joe Sixpack,” the average viewer.  (Journalists in some circles refer to their audience members as “Joe Sixpack,” a regular, ordinary bourgeoisie kind of guy.)

Social media has thrown kerosene on the bonfire.  Because media outlets can deliver information cheaply on Facebook Pages, social media is often the first place Americans – Millennials especially – get their news.  Here’s where it gets really interesting:  It’s easy to create fake news articles that look legit but are complete and utter BS.

Buzzfeed reports, during the Presidential Election season, the top five news articles that generated the most engagement on Facebook were all fake.

Why do people generate propaganda and lies under the guise of news?  To achieve a political objective.

Why does Facebook allow this kind of chicanery to continue?  Sponsored posts by fake news sites make lots of money.

And so, it comes to this, Millennials.  I extend my apology, on behalf of media of various types, for shifting the onus on you to distill truth out of our discordant voices.  What used to be the job of reporters, editors and newsroom managers is now yours to do, if you want to be well-informed.

“Our job is to report news before it turns into history,” is a legitimate exhortation I’ve heard in my three decades of media work.

However, in the rush to report breaking news, media outlets have released incomplete and incorrect stories.  (This is not meant to be an indictment of every journalist, but there are enough instances of this to warrant criticism of the industry at-large.) Retractions come later, but “the first cut is the deepest.”

Too often, it’s the erroneous report that is remembered – or worse, lights a powder keg – and unstable people do barbaric things in reaction.

Why is this so important?  Thomas Jefferson said it best: “Whenever the people are well-informed, they can be trusted with their own government.”

Social media has pluralized journalism.  That’s not necessarily an evil thing.  Look at how Twitter and Periscope have been used in the Arab uprisings of 2011, or more recently, in Catalonia just last week.

(I searched Twitter for Thomas Paine and found this blogger, @Thomas1774Paine, whose timeline has nothing to do with the Revolution and everything to do with my topic.  Follow.)

To its detriment, social media has also allowed propagandists direct access to the flock.  Remember Jefferson’s “informed electorate” stance?  Consider the dangers of a misinformed voting population.  Now recall the “October Surprises” that both political parties slung at the candidates, in hopes that you would change (or lock in) your vote on November 8, 2016. 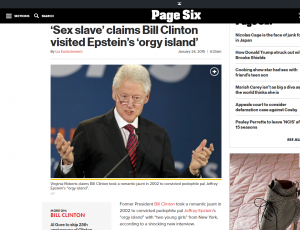 Fake news exits.  What can you do about it?  Learn to spot fake news and refuse to share it.  They’re paying thousands (maybe millions?) of dollars to get in front of people.  There’s no need to help them reach virality by reposting or commenting.  Your engagement is exactly what they’re counting on to help them accomplish their mission of misinforming the public.

Here are 10 things to consider when trying to spot fake news – courtesy The Press Gazette.

Now go out there and be media savvy!